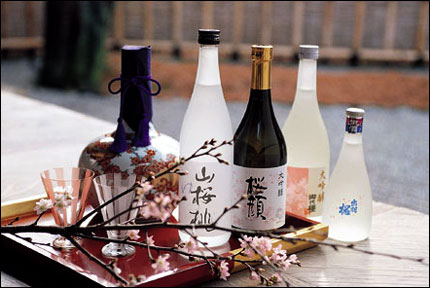 Happy thirsty Thursday everyone! We are only one short day away from the weekend, Yay! No matter what your plans are I hope they include relaxing and sitting down with a cold one, or maybe even our featured drink of the day–Sake.

Pronounced sock-ee, this Japanese beverage is a rice wine made from fermenting polished rice. If you frequent Japanese establishments like sushi or hibachi restaurants you may be familiar with the drink. Although it is a rice wine, it is actually made more like a beer than a wine. Because it is produced by brewing rather than fermenting. It is also much stronger than both beer and wine at about 18-20% alcohol by volume.

In Japanese sake can be used as a general term for alcohol where the english term sake is normally called nihonshu. If you are traveling to Japan to try this traditional drink then look for the word Seishu, as that is what sake is labeled as in Japan. Sake is the national beverage of Japan and thus served at ceremonies like weddings. It is generally warmed and served in a porcelain bottle, you sip out of a small porcelain cup. You will find this same procedure done here in the U.S. at Japanese restaurants as well.

The history of sake is unclear because the alcohol making process in Asia predates the record keeping process. The first reference to alcohol in Japan is in 3rd century writing. So we at least know that sake is thousands of years old.

Sakes come in a variety of flavors often flavored with fruit, flowers, herbs and spices. You can learn about the different profiles or make ups of different sake’s by reading the label. There are 3 indictors that will help you determine the type of sake that it is. Look for the words Nihanshu-do, San-do and aminosan-do. Nihanshu-do will tell you the sugar and alcohol content of the sake. San-do gives you the concentration of acids, and aminosan-do will tell you the sake’s savoriness.