It’s Thirsty Thursday everyone!! That means the weekend is right around the corner. Get through the next few days by sipping on our featured drink of the week the Mai Tai. One

thing this drink does is put you in the mood for a tropical vacation. Some of the best Mai Tai’s I’ve ever had were in the Bahamas and every time I sip one it brings me back to paradise. Let learn a little bit about this vacation style beverage.

A Mai Tai is made with white rum, dark rum, orange curaçao, Orgeat syrup and lime juice. They are typically garnished with a pineapple or a tropical flower. Shake your drink with ice and pour over ice for a refreshing cocktail that will transport you and your tastebuds to white sand beaches and crystal clear skies. 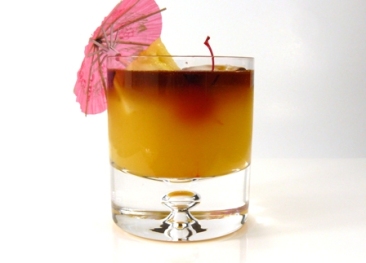 The Mai Tai is claimed to be invented by two rival restaurants in L.A. Trader Vic’s owned by Victor Bergeron claimed to have made the drink in 1944. Vic had friends visiting from Tahiti so he created this cocktail. One of the friends yelled out “very good” in Tahitian, which in the native tongue translates to Mai Tai. The rival restaurant who stakes their claim to fame is Don the Beachcomber restaurant. This tinsel town eatery claimed to have invented the drink in 1933, 11 years before Vic and his Tahitian friends. Reports claim that the Mai Tai’s from both restaurants taste so different that you may not even know they are the same drink. Officially there are 11 different ways to make a Mai Tai, so the argument will still persist.