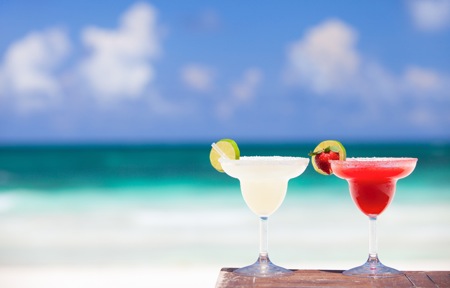 If you haven’t booked your warm weather vacation yet, now is the time. Need a little inspiration? Keep reading! Today’s Thirsty Thursday will feature everyone’s favorite– the margarita. A traditional margarita is made with tequila, triple sec and lime or lemon juice. The rim is often trimmed with salt. The drink can either be shaken with ice and strained into a glass with ice. This type of margarita is known as on the rocks. It can be blended, often called a frozen margarita and lastly it can be without ice and this style is known as straight up. Margaritas are served in many different style of glasses, but traditionally they are served in what is known as a eponymous margarita glass, which just so happens to look like an upside down sombrero. Ole!

Now that we know how to make this deliciously refreshing cocktail, lets learn a little bit about it’s history. Of course like every drink there are several claims to fame. Some say it was invented in Acapulco, Mexico, Houston or Galveston Texas and a handful of other Mexican cities. I am just going to go over two of the most widely accepted origins of our vacation favorite. One account claims that in 1938 bartender Carlos Herrera created the drink at he Rancho La Gloria between Tijuana and Rosario Mexico. It was said that he made the drink for dancer Marjorie King who had sever allergies to almost all liquor except for tequila. This drink then made its way up to

San Diego and La Jolla through friends of Herrera.

A second account claims the drink wasn’t invented until October of 1941. Don Carlos Orozco bartender at the Hussong’s Cantina in Ensenada Mexico was experimenting with many different cocktails. One night Margarita Henkel the daughter of the German ambassador came into the cantina. Orozco had her try one of his newest creations and since she was the first to try his concoction he named it after her.

Regardless of what story you believe the most important thing is that the margarita was invented and we get to have them whenever we want. And sure you could make one at home or go to your favorite Mexican restaurant, but we all know a margarita tastes so much better when you’re lying on the beach under the warm Mexican sun.

Looking to book that Mexican getaway now? I know you are, so give us a call 920.236.7777 or visit our website ambassadortravelltd.com to schedule an appointment with one of our Mexico/Caribbean experts.

One thought on “When Life Hands you Lemons”