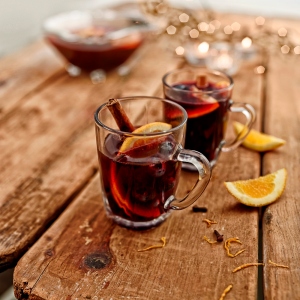 Happy Thirsty Thursday everyone, it is getting to be that time of year again where we turn all of our alcoholic drinks warm and pretend they help us get through the cold weather. Now don’t think this is a new tradition, people have been warming their beverages around the world for thousands of years to combat the winter months. One of my favorite winter drinks is known by many names throughout Europe, but American’s generally refer to it as mulled wine. I actually think I have a bottle still from last year so I am ready to go on our first bitterly cold day or maybe I’ll just turn my AC back on and pretend.

Mulled wine is typically a combination of wine, spices and some sort of citrus or other fruits. I will get into specifics shortly. It is a popular drink in Europe during the Christmas holiday season. It can often times be purchased at cafes, restaurants as well as markets. The first ever historical recordings of mulled wine was in the 2nd century Rome. The Romans as they were conquering everyone and everything brought along their wine, as all good soldiers do, up the Danube and throughout the Danube river valley. Northern Europe gets much colder than Rome so heating the wine was a good way to stay warm.

In the UK mulled wines and ciders are traditional from Halloween to Christmas they also offer mulled apple juice as an non alcoholic alternative. Germany, which is where I first encountered this tasty treat, calls their version Gluehwein, which literally means glow wine. Drink too much of it and your face will definitely tell you why it is named as such. The German’s use a combination of wine, cinnamon sticks, cloves, aniseed, citrus, sugar and vanilla for their masterpiece. The recipe also pops up in Nordic countries, the Netherlands, France and honestly in just about every wine drinking country throughout Europe; unfortunately for the Russians hot vodka just doesn’t have the same ring to it.

Now lets not forget about that French speaking territory to our North–Quebec. Let’s be honest the Canadians really do it better, by mixing red wine, maple syrup and hard alcohol. They call this Caribou, but in all honesty it should really be considered as their national beverage. Of course all of the recipes call for wine, then the Canadians decide to really make their mark on it by adding the maple syrup, but then they throw that wonderful curveball in there with the hard liquor. I can honestly say this is something I will try and eventually if you’re lucky I will record my findings in a blog post.

Overall the holiday season only brings out the best food, drinks and versions of everyone. So as the holidays begin to come upon us, pick out your favorite version of mulled wine, sit back and enjoy. For those of you not willing to mix these ingredients together, World Market, located in Appleton near the Fox River Mall, sells a tasty version of the German Gluehwein.