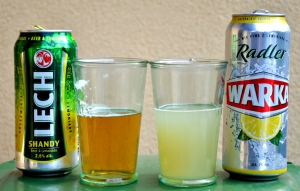 Have you ever wondered what the difference between a Shandy and a Radler is? Have you ever even heard of Radler before? Well let me drop some Beer cocktail knowledge on you then. Both Shandy and Radler’s are very much the same. Both mix beer with lemonade or sprite like sodas to make a refreshing beer cocktail. The only difference being Shandy’s are regularly mixed with other fruit juices and sodas. Shandy is a British from the word “Shandy Gaff” traced back to the 1850s meaning beer mixed with ginger ale. Radler on the other hand comes from bar owner Franz Xaver Kugler in 1922. Kulger used his lack of lemonade sales and his constantly inadequate beer supply to his advantage. Mixing the two and calling them Radler created both a problem solver as well as a delicious new drink. And although you can buy pre made Radler and Shandy at the store it is my personal opinion (and when am I wrong) to mix your own at home. Most store options as well as online recipes call for equal parts beer to lemonade. And that’s well and good for everyone who likes those percentages, but for me it is much more refreshing when the combination is 75% beer 25% lemonade. Cuts the alcohol with sweet, but doesn’t overpower the beer taste.

Now while I was writing this I was thinking of other things we could mix beer with to shake up (pun intended) the traditional cocktails.

Most recently I have heard of beermosas. A spin on the traditional breakfast beverage mimosa. These are becoming popular at brunch hotspots as well as Bachelor parties. Mixing beer and orange juice sounds like the perfect start to a great weekend.

Growing up in the U.P. beer mixed with tomato juices is a very common drink. It’s bloody maryesque and in my opinion, not very good, but my parents love it and many other do as well.

And finally I decided to google “beer cocktails” and as always the internet came through with some unique gems. Two that I figured I would like are the Black velvet which is made with champagne and Irish stout. As well as Mike’s full moon which is equal parts mikes’s hard lemonade and blue moon beer.