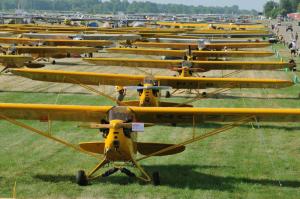 If you are from the Fox Valley, specifically the Oshkosh area, then EAA has been part of your whole life. This annual event brings in over 500,000 attendants from over 69 different nations throughout the world. Started in 1953 by Paul Poberezny, the Experimental Aircraft association was formed to bring recreation back to flying. Held at Wittman Field in Oshkosh, Wisconsin, the airshow was originally named The EAA Annual Convention fly in. It’s name was changed in 1988 to AirVenture Oshkosh, but it still referred to by some of the older patrons as just “Oshkosh”.  From its beginning until 1997 it was reserved for EAA members only. Once it was restructured and opened to the public it became the booming tourist attraction that it is today. During the show the air tower here in Oshkosh is the busiest in the entire world. The show not only brings in millions of dollars for the Oshkosh community, but also creates thousands of jobs. AirVenture Oshkosh also relies heavily on volunteers. These volunteers are the backbone of the show and are awarded with free food, t-shirts and access to the shows for free.

Consultant Connie has been to the show and has this to say:

Being a community based business, here at Ambassador Travel, we love to highlight other great businesses that do so much for our community. EAA has become a world renowned event that has brought millions of people to the Oshkosh area. We are proud to be a business that is involved with EAA and are happy to book your vacations when you get out of town for this week!